I’m currently writing from the only coffee shop in Nelson County, Virginia, the lovely Rapunzel’s Coffee and Books.  I moved to this one-stoplight-county for one reason only, the great wood-fire potter Kevin Crowe and his Tye River Pottery.  I have now been his apprentice for six months, and have in that time, discovered a plethora of reasons to love this place.  Nelson County, in the foothills of the Blue Ridge, is a friendly, rural, and charming corner of the world.  The fabulous farmer’s market, the blooming Bartlett Pear trees, the two micro-breweries, and the infectious music scene are just the highlights of my life here in “The County.” 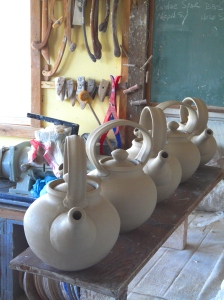 The apprenticeship, my first draw to this place, has been kicking my butt.  From nine a.m. to five p.m. Monday through Friday, I work at the wheel next to Kevin.  He has been dismantling my throwing style and re-building my techniques in his own ways – and I feel stripped bare.  My standards for my own work are getting tougher by the day, by the hour.  Each time I sit at the wheel, I feel capable of more than the last time, and the pots I made yesterday rarely make it to see tomorrow.  Out of the nearly forty teapots I threw and assembled in February, only four will make it to the kiln.  It is truly a privilege to have this time to devote to the learning process, and not feel the pressure to produce large quantities of salable work.

This form of learning – apprenticeship – has a long and varied history in the world of craftspeople.  The master-apprentice relationship has been used to pass along skills within a guilds of crafts from one generation to the next for more than a millennium.  For apprentices in the most traditional forms of that role, their lives would be centered around making work good enough for their master to sign and sell as his own.  My relationship with Kevin is quite different from that.  He guides me through his method for creating a particular form, and then I explore that form for a number of weeks.  I never make his work.  I am surrounded by his pots, and his eye certainly informs my pieces, but the pots I throw are truly my own.  Each day we do studio maintenance tasks, have small critiques, eat lunch together, talk pots, make pots, drink tea, and clean up the work space.  It is a work-exchange where I earn my keep by cleaning and mopping and recycling clay, and Kevin passes along both the knowledge of his life’s work and his passion for it.

This is an intimate form of education.  When I first arrived at Tye River Pottery, I was haunted by the concern that I would lose my voice in clay.  I was worried that, under Kevin’s tutelage, I would learn to make his pots and forget how to make my own.  With six months under my belt now, I now know that concern is unnecessary.  No matter how hard I might try to emulate Kevin’s work, I could never reproduce it.  I trust my  eye for form and I know it will make itself known in everything my hands produce.  Daniel Rhodes, in his book Pottery Form, says it best,

“Pottery as meditation, as selfless concentration, requires the abandonment of anxiety and the perfection of skill to the point where it can be forgotten and one’s consciousness becomes absorbed in the tactile sensations of process.  In this state, the work will form itself, and the potter may feel presumptuous even to take credit for the happenings which emerge from his kiln.  The question of originality will have been solved.  Who asks whether their own pattern of speech and expression are original?  No one, because we all achieve originality in speech by a lifetime of concentration on what is said, rather than how it is said.”   p239

Susannah is an artist-potter and art educator who makes her home in Detroit, MI. She can be found teaching at Ladybug Studios and Pewabic Pottery, spends her mornings wrangling children at the Detroit Institute of Arts, and serves on the Michigan Council for Arts and Cultural Affairs. Oh yeah, and she makes things with her hands.